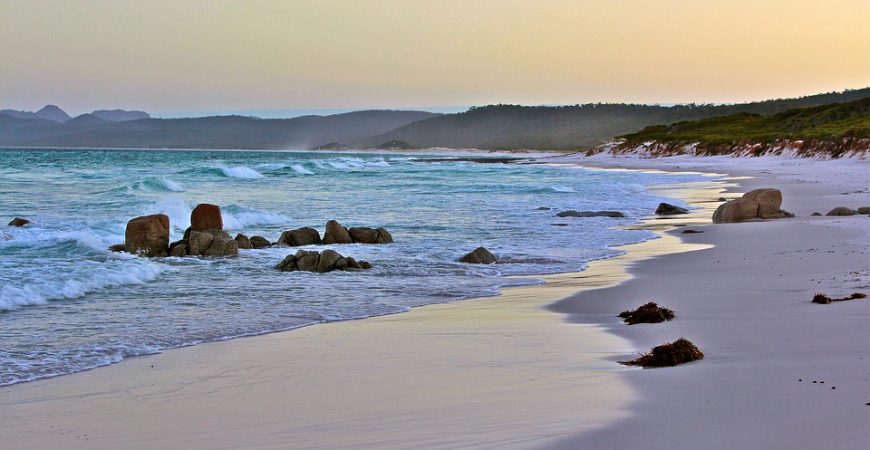 Traveling to a tropical island can be fun and exciting. It is best to know a little about where you are going to help you enjoy your trip a little more.

One of the mildest climates belongs to Australia. There is never a bad time to travel to Tasmania Travel any time during the year and you are guaranteed beautiful weather and fun-filled time. Below is a list of 10 awesome facts about Tasmania Island, which is part of Australia.

Tasmania is best known as the home of a fierce little creature, the Tasmanian Devil. This small mammal has been immortalized in cartoons for many years; however, the real animal is a far cry from the funny character.

The Tasmanian Devil is the largest land marsupial, a carnivorous animal, at a little over 25 inches (64 cm) tall. They gained this title shortly after the Tasmanian Tiger became extinct. The females have pouches, like kangaroos, to carry their young babies.

The Tasmanian Devil’s bite is as strong as a dog bite that is four times its size. Their teeth are extremely sharp and can bite through thick, tough skin and some smaller bones.

Besides eating sick and dead animals, the Tasmanian Devils are a popular tourist attraction. Because they are cute, yet can be vicious, they lend their name to many sports teams around the world.

The island of Tasmania has a constant temperature, a mild “maritime climate” which garnered the island the ‘Best Temperate Island in The World’ by Conde Nast Traveler Magazine, twice.

The island is also known as the ‘Island of Inspiration’ due to its natural, unspoiled environment. There is plenty of outdoor activity for travelers and natives alike.

Tasmania is the number 26 largest island in the world. It follows Sri Lanka (#25) and beat out Devon Island (#27) in Canada.

Tasmania is about the size of Ireland, and almost as green, but with less beer. There are 10 major breweries, and a handful of small craft beer breweries, on the island. Most are producing an Irish malt and a traditional English style beer. There is a Tasmanian Beer Tour for those who would like to sample the different beers on the island.

The island of Tasmania has been called “Apple Isle” because it has one of the largest apple-growing manufacturing businesses in the country. It was once one of the major apple-growing areas in the world but has been scaled back in the past decade.

Another interesting tree fact from Tasmania is it also holds the record for the largest and oldest trees in the entire world. The Huon Pine has been scientifically given age of somewhere around 10,000 years old.

Besides feeding the Tasmanian Devils, there are many outdoor activities for the adventurous tourists.

Sailing is another near year-round pastime near Tasmania. A group or couple can rent a yacht sail across the Macquarie Harbor to the Gordon River on an overnight excursion.

Tulips are probably not the first thing that comes to mind when thinking of taking a trip to Tasmania. The Table Cape Tulip Farm is known as a remarkable natural wonder. It is located at approximately 197 yards on an extinct volcano near Wynyard in Northern Tasmania.

A variety of crops are grown in the rich volcanic soil, known as the rich soil in Tasmania by all the agricultural groups. It is a beautiful sight in the months of September and October but blooms various colors in the spring.

Tasmania boasts the cleanest air in the world. This high distinction is given by the Cape Grim Baseline Air Pollution Station. Tasmania is set in the Southern Ocean, away from other land masses. Known as the Roaring Forties, a strong Westerly wind, carries pollution-free air thousands of miles across this ocean.

Nearly 20 percent of Tasmania, the Tasmanian Wilderness to be exact, is marked as a World Heritage Area. A space covering 1.58 million hectares is home to forest reserves, national parks, and marine reserves. Many of the remote areas are only accessible by foot and the area goes as far as south of Tasmania to the Cradle Mountain in the Northwest.

Tasmania has 18 national parks and over 1240 miles of beautiful walking trails. These trails pass by and through amazing ancient rainforests, beautiful coastlines, and world heritage areas. The walking trails are as short as nine hours and as long as nine days. Guides are available to help you and your family navigate the different terrains. If you don’t know one of these areas, it is best to have someone along who is an experienced tracker.

In 1902, Australia, which included Tasmania, was the second country in the world to give women the right to vote. Tasmania and Australia are now and have always been a progressive state.

New Zealand was the first country, in 1893, to allow women to vote. The United States waited until 1920 granted women the right to vote. It wasn’t until 2011 that King Abdullah of Saudi Arabia allowed women to vote.

If you are planning a trip to Tasmania, be sure to pack beach gear, your hiking boot, and your adventurous spirit, because there are plenty of activities to do in the warm weather haven.