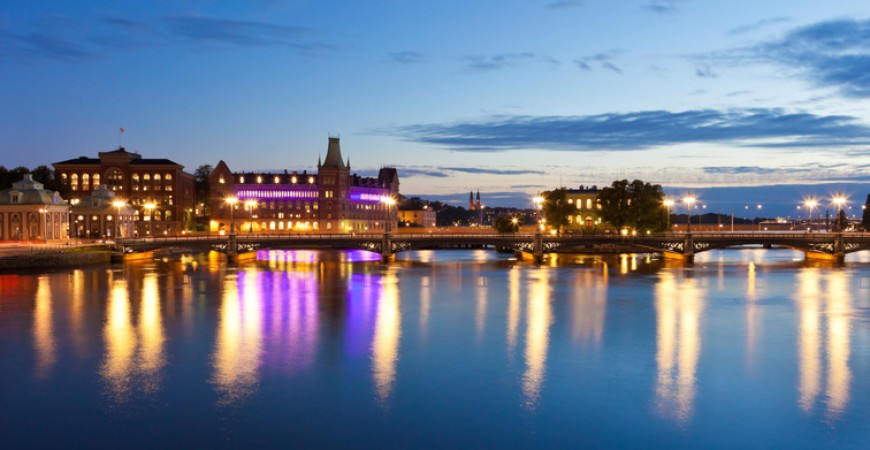 Sweden is now known as one of the most eco-friendly countries in the world. With all their achievements in helping mother earth become a better place to live, it’s kind of hard not to gawk at every innovation that they thought of. The Swedish has taken it upon themselves to make a better future for the next generations. In all their eco-friendly innovations, even tourists attractions weren’t overlooked. So many attractions have been opened up and established for the enjoyment of locals and tourists, all of which are 100% eco-friendly. And for the record, some of these aren’t just the kind of attractions that you simply admire and look at, some of them are actually functioning hotels and lodges. One of the said hotels is called Kolarbyn, it’s the most primitive hotel in Sweden. How primitive you ask? Well there’s no electricity or water, that’s how primitive. But despite all that it’s quite lovely actually; you get cozy little room with a fire place, two beds with sheep skin rugs, it’s not the most comfortable place in the world and yet there’s a certain beauty to staying there. After a warm and cozy night you’ll wake up to birds singing […]

Best Locations For An OAP Holiday In The Sun

Just because you’re nearing the twilight years of your life, that doesn’t mean you can’t still have an amazing holiday. The best thing about taking a vacation as a pensioner is that you don’t have to come home in time for work. That means you’re allowed far more flexibility when it comes to the amount of time you spend abroad. With that in mind, we’re going to present you with a list of the top OAP holiday destinations this morning. You should take a quick read through before selecting the one you feel is most suitable.   Don’t worry too much if you haven’t got a lot of money in the bank as most of the destinations in this post have lots of budget accommodation. So long as you think carefully about how to book your flights, there’s no reason you couldn’t have a couple of weeks in the sun for as little a few hundred pounds / dollars. Rome If you have an interest in history and you want to do something a little more exciting than sitting on a beach, Rome could be the perfect location. Here, you’ll find lots of ancient architecture and some of the best […]

Key West in Florida is one of the places to be in if you are looking for a beach vacation. Although just a small island, you can look forward to having a great time during your stay. Key West hotels on the beach have a plethora of activities that will make you want to come back again. Most of the hotels in the island are fully furnished and has a kitchen which really makes them truly a home away from home. Here we will look at three hotels that Key West has to offer to its guests. Crowne Plaza Key West La Concha Elegance and technology converge in Crowne Plaza Key West La Concha. Whether for business or pleasure, the hotel comes with facilities that can contribute to having a worthwhile stay. Located in the heart of Key West, it has 160 rooms complete with bathroom with toiletries, a safe for your belongings, hair dryer, coffee machine, and an iron and ironing board. The hotel has a restaurant that caters to both local and international cuisine. Jack’s Seafood Shack provides seafood with a bar complete with softdrinks, cocktails, and light snacks. For your business pleasure, Crowne Plaza has two meeting […]

Finding a hotel for your next trip is one of the most daunting tasks in planning your next travel. The task becomes even harder when you are tied down by a budget. However, even if money is an issue, you can still find quality accommodations wherever you plan to travel. Here are some tips on finding cheap hotels on your next trip. Use travel sites The proliferation of travel sites such as Lonely Planet and Trip Advisor has made searching for a hotel easier. You can see their ranks and how they fare well against other hotels in that area. Check how many stars they have because this determines their quality and luxury level. The more stars, the better. Obviously, the more stars the more expensive is the hotel. Take advantage of rewards programs Just because the hotel you have in mind has a 4 or 5 star rating does not mean that you cannot afford them. Search the Internet and look for great deals and discounts for these establishments. Capitalize on any rewards program that your credit card provider, workplace, or other affiliations are offering. Likewise, look for any special offers available for your scheduled travel. See if any […]

Working or traveling to Hong Kong may have some drawbacks and two of its hindrances may revolve around staying long-term, and paying for costly room accommodation/s (particularly for solo travelers who doesn’t have anyone to split the bill with). While many can afford extended stays in a hotel, others still dwell on the idea of wanting to save and budgeting more. So how can you enjoy being in the city when you’ve got these to worry for? Well, for a no-hassle deal, you can always consider residing in a serviced apartment hotel Hong Kong. It’s a fully furnished and fully serviced lodging that offers the usual home comforts with some hotel luxuries, for a fraction of the cost.  Services and amenities that you can look forward to in a managed apartment There’s a lot that you can look forward to when residing in a serviced flat, so if you like staying in a space that has all the comforts of being at home, then you’ll definitely feel more relaxed in one. But you’ll probably enjoy more when you find out that most managed apartments already offer several hotel luxuries and services. One great example of a temporary housing provider is the V […]

If there is one thing that often stands out to visitors to Europe, it’s the architecture. Whether you are visiting Great Britain, Germany, Portugal, or France, there are buildings that are beautiful to look at no matter where you go. A lot of this beautiful architecture is not only reflected in the landmarks, but also in the homes of the people. There are many different styles of homes that you can run into around Europe that vary from country to country. The buildings in Europe are often constructed to last, which is why it is fairly common to find features such as tile roofs. A few types of houses that you may run into across Europe include the Airey, Bungalow, Chalet Bungalow, flat, and Barraca. Airey homes became popular after World War II in Great Britain. These homes get the name Airey from Sir Edwin Airey, who designed it. The homes were prefabricated with cast concrete, and as such have fallen into disrepair in many areas. Many have recently undergone refurbishment by putting blocks where the concrete slabs once were and putting brick up around the facing. With this refurbishment, these homes may still be around for a while.   […]